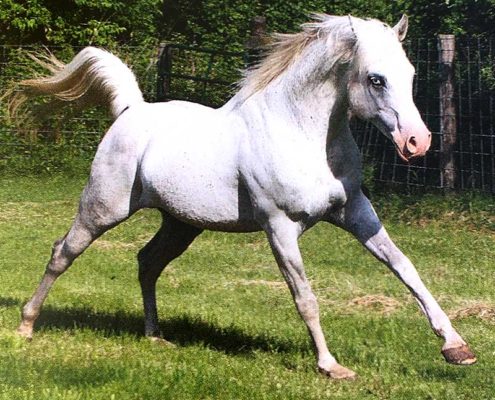 Very little about RFR The Iceman has been by the book. The striking gray stallion defied genetics when he was born with sabino overo markings and two piercing blue eyes outlined in black. He defied geography to race at a pari-mutuel venue, then when he was done running, he defied neglect to recover physically and emotionally into the horse he once was.

His owner/breeder Pamela Fullerton was just as defiant, standing up for her horse on the track and in the empty field, and eventually defeating Stage 3 lung cancer to reinvigorate her own equestrian career.

The Iceman was born, and resides today, at the Fullerton family’s Resolute Farms in Athens, Wis. Sire RFR Polar Star and dam I Ofthe Flame were both Resolute homebreds, with the racing blood coming from his mother through broodmare sire Flaming Streak. I Ofthe Flame won one of nine starts at Mount Pleasant Meadows in central Michigan, under the training of Pamela’s son, Jason Fullerton. What made her on-track career memorable, though, was her right eye – colored a light blue that accented her gray coat.

Fullerton, a retired administrative law judge and lawyer, knew she had something unusual with I Ofthe Flame and was diligent in making sure her unique filly jumped through every bureaucratic hoop for registration and recognition.

“When [I Ofthe Flame], who had one blue eye, was born, I called the [Arabian Horse Association] and said, ‘Oh my God, what happened? I’ve got this Arabian filly with a blue eye. Did the Appaloosa from down the street get in or something?’” Fullerton said. “They said, “No, one in maybe 25,000 has a blue eye.’ I asked if she could still be registered, and they said, ‘Oh yeah, we blood type them. They’re all DNA’d and everything. If she passes her DNA, we’ll be happy to register her.’

Fullerton bred I Ofthe Flame to RFR Polar Star, a Russian-line sire who was a regional champion sport horse in hand. The breeder expected an attractive foal, but when the colt opened his eyes, she realized she had a once-in-a-lifetime horse.

When the colt shed out and revealed himself to be gray, The Iceman also unveiled facial markings as though he had dipped his nose and mouth deep in pink and white paint. Plenty of horses have blue eyes caused by a blaze splashing over them, but The Iceman’s naturally black lining sent Fullerton back to the geneticists to make sure her colt was on the level.

Fullerton consulted Dr. D. Philip Sponenberg, one of the country’s leading researchers in horse color genetics, to determine how a horse with such rare features came to be. The Iceman’s Arabian blood was legitimate, but he still left the researchers puzzled. “We had it tested by them, and they could not find the gene that was causing it,” Fullerton said. “The normal gene that causes splash white, or sabino, in Arabians is the SB1 gene, and he is negative for that. Sponenberg postulated that either it was a gene they had never uncovered before, or that it was maybe something closer to an overo gene because it was so unique in its patterning.

“I know everybody says there’s no such thing as an overo in Arabians,” she continued, “but that’s Sponenberg saying it, not me.”

Wisconsin is far from a fertile ground in regards to horse racing. It has no pari-mutuel tracks, and a decade has passed since more than 20 Thoroughbred mares were bred there in a season. Arabian racing is on an even bigger island. Fullerton was instrumental in getting the occasional Arabian race to Canterbury Park in Minnesota, but the closest recurring meet was at Mount Pleasant.

With Lake Michigan in the way as the crow flies, getting to the middle of Michigan’s Lower Peninsula takes over eight hours, either looping north through the Upper Peninsula and down the Mackinac Bridge, or south through Chicago. The miles were immaterial to Fullerton for a chance to run her horses under her colors.

“We used to finish up the races on Sunday night at five o’clock, load the horses, get in the truck, and go on a 10-hour jaunt up and over the [Mackinac] Bridge,” she said. “I’ll tell you, at night, sometimes with the wind, that was a real interesting experience. You’d feel that old four-horse trailer behind you wiggling a bit and pulling the truck, but it was worth it. I loved racing. It was my passion.”

The Iceman had a certain future in any range of show disciplines and a life at stud afterward, given his pedigree and unique looks. What Fullerton saw from the young colt in the field, though, convinced her it was worth putting The Iceman on the long trailer ride, joining RFR Silver Crescent, by the same sire.

“He is the most agile animal I have ever met, and he’s competitive,” Fullerton said about The Iceman. “There are horses that when you start training them, they don’t get the game. They will run alongside the other horses, or they will run behind the other horses, and no amount of urging with hands, or legs, or a crop will get them to move out of position. They do not understand that the game is to catch and surpass. Some of them know it by instinct – Iceman and Crescent do it by instinct.

“A lot of stallions actually think they’ve got to herd the horses ahead of them. Not Iceman. He wants to be out in front saying, ‘I’m leading you to safety. Just follow me.’”

The Iceman debuted at Mount Pleasant as a 4-year-old, racing as a homebred for Pamela and trained by Jason. It wasn’t as easy as entering the gate. While Pamela went to painstaking lengths to vet out The Iceman’s genetic credentials, having the proverbial needle in the haystack meant starting from square one with a new, skeptical crowd.

He wants to be out in front saying, “I’m leading you to safety. Just follow me.”

“They said he doesn’t belong there; he’s not an Arabian,” she said. “There were a lot of people who said he’s not a real Arabian because he had blue eyes. I would say, ‘Do you know how long Arabians have been blood typing and DNA testing? It’s longer than any other breed in the U.S.’”

When he hit the track in competition for the first time on July 18, 2010, The Iceman’s blue eyes and pink nose were far from the only things that made him stand out from the crowd. Facing a racing breed that often looks less and less like the classic silhouette of an Arabian, The Iceman’s small size, dishy face, and flagging tail were a throwback.

The Iceman ran fourth of six in his first start, finishing 24 ¼ lengths behind the winner after a troubled start. He was eventually promoted to third, but after the race was declared official.

The colt made his second and final start later that month on July 25. It was a more competitive effort, with The Iceman breaking among the lead runners, and eventually settling into third, 5 ¼ lengths off the winner. Like his first start, The Iceman was promoted to second, putting him on the board in both of his career starts.

While racing was Fullerton’s passion, it was difficult to gain a foothold in the Mount Pleasant colony, where the track’s best Arabian riders were usually spoken for by the regular trainers. Swimming against that current, paired with fatigue racing against the dominant French bloodlines, led the Fullertons to take their horses back to Wisconsin.

Though they were no longer among the pari-mutuel ranks, The Iceman and Silver Crescent were not yet done with racing. The Fullertons took their Arabians to the Richland County Fairgrounds, about 130 miles south of Athens, in September 2010 to run Arabian-exclusive heats and open-breed races.

As humble as Mount Pleasant Meadows was, the track shone with the majesty of Churchill Downs on the first Saturday in May compared with the central Wisconsin oval – small, tight, and without rails or a finish line. Starts were jog-ups made official by a whistle, and the riders’ stirrups wrapped low around their mounts’ ribs.

The Iceman raced twice that day, and finally got off the duck at the fairgrounds, besting stablemate RFR Polar Reign in a match race with an impressive rope-a-dope closing move.

The natural competitiveness of The Iceman shone through in that stretch drive. His blue eyes were even brighter, and his ears were pricked high as he drew away smoothly from Polar Reign. Perhaps it wasn’t as Fullerton planned, but for one lap in rural Wisconsin, the winning instinct she saw from the young horse in the field came through on the track.

In his other start, The Iceman was part of a four-horse field reuniting with Silver Crescent and Polar Reign. He took to the lead in that heat, but couldn’t keep it, eventually finishing third to Silver Crescent.

That was the end of Fullerton’s racetrack days for the time being, but her adventure with The Iceman was just beginning.

Racing in the UAE
Scroll to top