Racing in the UAE 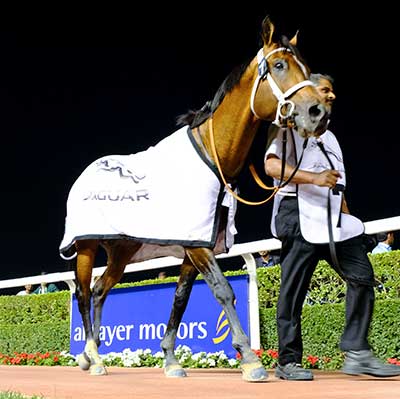 Paddys Day became the first Arabian racehorse in American history to earn more than $1 million in purses and bonus money with his victory in Thursday’s Mazrat Al Ruwayah at Meydan Racecourse in the United Arab Emirates. The two-time Darley Award Horse of the Year in the United States has now earned $1,024,746 in an unprecedented career that includes 24 wins in 39 starts, including eight victories in Grade or Group 1 races.

“It’s absolutely unbelievable,” said Lori Powell, who owns Paddys Day with her husband trainer Scott Powell of the Quarter Moon Ranch. “It was never a goal we set, but this year it became a reality, and he keeps going strong.”

Now making a name for himself internationally while based in Dubai, Paddys Day is being pointed to the $1 million Kahayla Classic on the Dubai World Cup card, the richest day of horse racing in the world, at Meydan on March 31. This year, the 7-year-old bay horse won the first round of the Al Maktoum Challenge on January 1, finished second in the second round on February 1, and scored a 1 1/4-length victory in the Group 2 Mazrat Al Ruwayah all at Meydan.

Since starting his career in Colorado in 2014, Paddys Day has won races in six different American states and in the United Arab Emirates. The horse’s earnings are made up of $574,746 in purses and $450,000 in bonuses for winning the Sheikh Mansoor Festival’s Triple Jewel series for the last three years. Paddys Day has surpassed the $622,048 earned by DA Adios from 2001 to 2006 to become the highest-earning Arabian racehorse in American history.

“It will be interesting to see how far he will take this until he retires,” Lori Powell said.

The Powells have teamed with Dubai-based trainer Doug Watson for Paddys Day’s campaign in the United Arab Emirates, and Pat Dobbs has been the horse’s jockey this year at Meydan.

Behind the Scenes with Evie Tubbs-Sweeney
Scroll to top