Behind the Scenes with Evie Tubbs-Sweeney 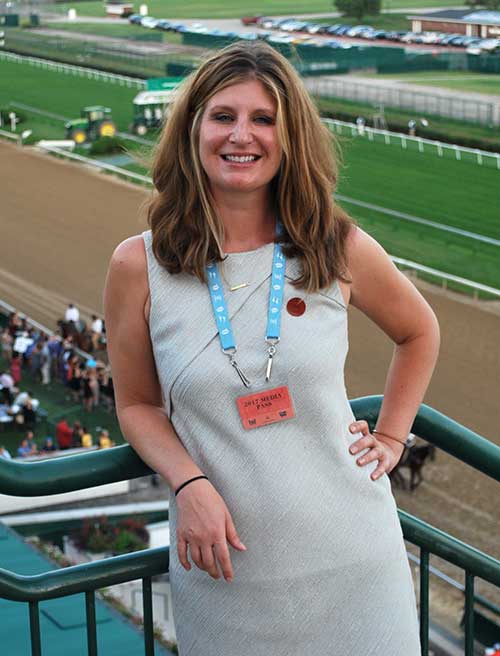 My job is two-fold: 1.) To promote AJC within the global Arabian racing community, and 2.) To promote Arabian racing outside the Arabian racing community in order to grow the number of owners (and horses) in the sport. We accomplish this primarily using social media and digital marketing platforms. One area I’m particularly proud of is our foresight in utilizing Facebook Live to live stream the biggest and most lucrative stakes races in America, as well as the Jewel Crown in Abu Dhabi. We have created a venue that not only brings the existing community together like never before, but has also successfully solved the problem of reaching new people.

3. How did you get started?

The entirety of my professional career has been in the marketing field of the Arabian horse industry. I started with the Arabian Horse Registry in 2002 as its marketing manager, then moved to the Arabian Horse Association in 2003 shortly after the two organizations merged. In 2006, I left to begin my own marketing consulting company and have been doing it ever since. At some point, I began to see the massive evolution of social media in the horse industry. I witnessed its power first-hand, and was intentional about redirecting all my clients toward social platforms as the primary foundation of their marketing programs, as I believed it represented the future of how equine professionals and organizations would eventually market. Meanwhile, in 2009, I had my first taste of horse racing and began an orthodox love affaire with the great Zenyatta.

It wasn’t until the 2013 Breeders Cup at Santa Anita that I was exposed to Arabian racing through the President of the UAE Cup S. In doing so, I reconnected with longtime friend Sue Meyer (then AJC Vice President) and met Kathy Smoke (then AJC President). Timing is everything, and they happened to be looking for someone who could help them garner more exposure for the Arabian Jockey Club. It was a perfect match, and I thank my lucky stars every day that this serendipitous meeting happened. And while the show horse world was where I started and where many of my clients still reside, the sport of Arabian racing (and its community) has reignited my enthusiasm for this breed all over again.

4. What’s the best thing about your job?

Two things come to mind. The first is the extraordinary team with which I get to work. They represent the highest levels of integrity and professionalism, which is sometimes a hard combination to find in the horse business, and plus they love their cocktails as much as I do! We are all cut from the same cloth, in many ways. Then there are the unbelievable opportunities. Broadcasting from these high level races around the world, and being the privileged one responsible for relaying the excitement and inspirational stories that racing creates, is beyond satisfying to my passion-driven self. I get “pinch-me” moments all the time. For sure, the highlight of 2017 was standing in the historic winner’s circle of Churchill Downs interviewing Tom and Joyce Fritz about their handsome homebred, Quick And Rich. The second-best highlight of 2017 was receiving a private press pass to Bob Baffert’s barn and interviewing that whole storied team when Arrogate returned home after winning the Dubai World Cup.

5. What’s the worst thing about your job?

Having a two-year-old and not being able to travel as much as I’d like! But that was the deal I made with my husband… for now.

6. Tell us about any horses you own/ride.

I own a 16h purebred Arabian gelding named Shownanimous (Showkayce x SC Zimpatique) who was a national top ten hunter pleasure horse back in the day and now is my trail gelding. We also have a broodmare named Euphorika IA (Sir Fames HBV x Psyches Euphoria), who is in foal to the beautiful Om El Al Azeem this year. And as far as racing goes, we are proud partnership members in Goldensands Racing, managed by good friend Amanda Roxborough. It is a three-horse partnership lease comprised of the five-year-old colt Madjikman (Madjani x Rubie Rose), the five-year-old gelding Belfastt (Nivour De Cardonne x Bella Atheena), and the three-year-old filly Iridesse (Dahess x Topoftheclass).

I live in California wine country, and at some point realized that horses – mine anyway – love Chardonnay. Who am I to judge?

Get stories like this and much more in each issue of Arabian Finish Line.

Racing in the UAE

Clash of the Titans: The Day *Orzel Met Kontiki
Scroll to top